FED CUP. ONE WEEK TO GO

Just one week left before the match between teams of Belarus and The Netherlands for the spot in the Fed Cup Finals. Aliaksandra is getting ready for this vital for the team tie and is ready as usual to give everything on the court for the team. Let's review Sasha's match history with opponents from the Netherlands.

Aliaksandra has played against 3 girls from the opponent team. The biggest history Sasha has with Kiki Bertens (10 WTA). Sasha and Kiki faced 4 times and currently H2H is 2-2. The last match was played in Moscow in 2018 and Sasha has won that tie. The detalied match history can be seen below:

Also Sasha has played ones against Lesley Kerkhove (167 WTA). The match was played already almost 5 years ago in Saint-Petersburg, but still – Sasha got the win in that match and to the data has H2H 1-0.

Also in qualification in Miami in 2016 Sasha met Indy de Vroome (208 WTA). In close match Aliaksandra was able to win and has H2H 1-0.

Additionaly, it is important to add that Sasha has never played against The Netherland’s number 2 – Arantxa Rus (93 WTA) having H2H 0-0. 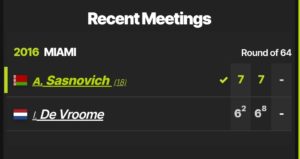 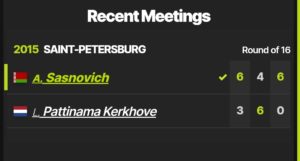 Fed Cup is coming and the captain of Belarus team will have to make the decision who will play singles matches ad potentially deciding doubles match. Hopefully, we will see Sasha in action playing her best tennis showing her colors.

Stay with Sasnovich.com and Sasnovich Team in all the social networks for future updates.