Interview: Success in Limoges and Season 2020

The season has barely started when Sasha has played already 8 matches and managed to reach the final in WTA 125K event in Limoges. We spoke with Sasha about the start of the season and about the plans for 2020.

– Sasha, congratulations on the successful start of the new season 2020. Tell us how the pre-season preparations for the important Olympic year went.

– Preparation, as always, took place in Minsk. Now I have a general fitness coach – Vadim Sashurin. I also turned to Vyacheslav Konnikov for help. I respect him as a person and as a professional. He raised a great generation of tennis players: Maxim Mirny, Vladimir Volchkov, Tatyana Puchek. While I was in Minsk, he helped me for two to three weeks. At the moment, I do not have a permanent coach. Of course, dad always supports me and plays the role of a coach. He knows me, feels me and understands tennis no worse than many coaches.

– The season, in fact, has not yet begun, and you have already played 8 matches (won the exhibition tournament in Caen, played in the Czech League and reached the final at the tournament in Limoges). How do you find this start?

– The final match against Garcia in Caen was the starting point. It was a very important match for me. Then I went to Prague, where I played the match against Victoria Kuzmova and won. But after the meeting, I felt that I had caught some kind of virus. I felt very bad and did not train for three days. I went to Limoges, but I felt that I was not ready to play. I already had a withdraw form. It just remained to carry it for signature. But then I saw the tournament draw, where in the first match I had to play with Isabella Shinikova. This was a very good option for the first round, it was just necessary to play competently and I decided to try. And I won, then they gave me a day of pause. Further along the course of the tournament, I felt better every day.
In a word, not everything was so simple in these 8 matches in December. But I think all the matches were good. For me, the most important thing was to play. Because last year I played only one exhibition tournament in Caen. And I realized that it’s very important for me to play for the score. In this game you are under pressure, stress. This allows you to get used to the tournament atmosphere, find the game rhythm. 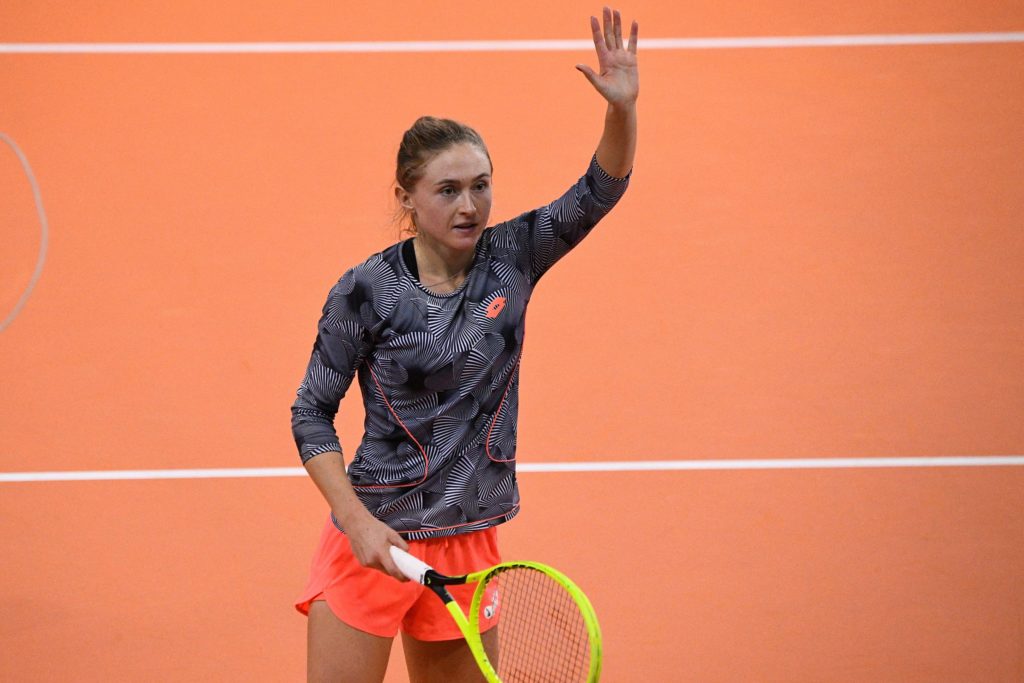 – What can you say about the final match in Limoges against Ekaterina Alexandrova?

– Of course, I really wanted to win. I could not help but think that I play in the final. I could not cope with my thoughts. After all, Katya and I know each other well, we trained together. We played in Prague together, then we traveled by car from Prague to Limoges. And during the training matches, I beat Katie. When I play my tennis and when there is no stress. But Katya is more stable emotionally. In addition, she had even more matches than I, probably, two times. She played for the French and Czech league. Of course, she is making excellent progress. But, again, if I had shown my tennis, the final would have had a completely different picture.

– Many people also noticed that Limoges has a very fast court. Do you agree with that?

– Yes, I agree. I like to win pauses, play across the entire width of the court. And there you need to play quickly, on low legs. The court is definitely faster than average.

– Despite the defeat in the final, are you satisfied with the first official tournament of the new season?

– I have not played in the finals for a very long time, almost two years have passed. I analyzed the final match, why it happened. And next time I will act a little differently. But I was still pleased with the tournament. My mother even praised me for the first time in a long time. She said that I played very well. I believe that I gained a good physical shape. Because even the virus could not break me. It is a positive start!

– At the tournament in Limoges there was still a very interesting second-round match against Anna Blinkova.

– Yes, it was a very unusual match with Blinkova in terms of many things. She is now working with Platenik, with my previous coach. I treat Anna well. She is great hard worker. Also added recently, a very difficult opponent now. Spectators really liked this match. And the audience throughout the tournament supported me a lot!

– Yes, firstly, french people understand tennis: they know when to applaud, how to behave. In France, there are a lot of tennis lovers, players of all ages.

– But at the exhibition tournament in french Caen, you beat Caroline Garcia.

– It was not an exhibition final at all! We played 100% and both wanted to win. We played to win. By the third set, I stopped making mistakes and won it 6-0. I believe that showed a very good tennis. I am glad that I was able to win this tournament, because last year I lost to Elina Svitolina.

– What are your plans for the tournaments in January?

– I play Shenzhen, then the new Premier in Adelaide and, of course, Australian Open. In Melbourne, I will also play doubles with Victoria Kuzmova. We did well at US Open, and we decided to continue playing together. I look forward to the start of the new season! I continue training and try to approach the January tournaments in full readiness.

We wish Aliaksandra the best of luck and can’t wait for more good results in 2020!